October 2020 saw our highest number of Zoom attendees yet at 24 (including one late-comer, naming no names!)

If you want to find out more about some of our members do check out the Member Spotlight page. Bear in mind that we do one a month so there’s an ongoing list of people to add!

This month’s presentation was from David Marsh, the Stowmarket Town Council Events and Theatre manager of the Regal Theatre. 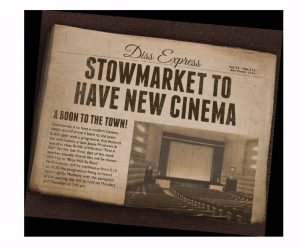 Fascinating facts about the Regal cinema and its history

David Marsh is a mine of information on the cinema that has been on its current site, the old Duke’s Meadow, since 1936 when it was built to replace previous travelling cinemas.

The cinema was run by VEH until 1972 when Stowmarket Town Council bought it to ensure it was not closed down after UGC declined to buy it.

Money was invested in building a stage and dressing rooms so that the building could be used for live shows as well as screening films. There have been regular Christmas pantos at the Regal ever since.

In 1985, the Regal was the only cinema to premiere a film called House of the Long Shadows, attended by one of its stars Peter Cushing, because the film’s backers were not happy with it.

However, by 2005 the cinema was struggling because of competition from multi-screen cinemas in Ipswich, such as UGC and the Odeon, so the consultancy Top Cat Cinema was brought in to help. Within three years attendance had risen from 6,000 to 18,000 per year. David himself was “poached” from Top Cat Cinema and the first film booking he was responsible for was Mamma Mia.

Sadly, in 2009 an arson attack caused £500,000 worth of damage but the cinema rose, like a phoenix from the ashes. After a rebuild, admissions continued to climb, reaching around 70,000 a year.

The Regal is one of only a very few remaining single-screen cinemas in the country, and the Town Council decided it was time to invest more if it wanted to continue to increase audiences. So approximately six years ago, having carried out a public consultation which gained the support of 96% of respondents, the Town Council with financial support from Mid Suffolk District Council agreed to provide £3.63 million in funding to provide two additional screens and to develop a cafe-bar on the site.

Plans also include safeguarding and preserving the old box office and Stowmarket High School was involved in this project.
Work began in March 2020 with the intention of opening by December this year (2020).

Then came Coronavirus and lockdown

This only put back the on-site work by four weeks but, during lockdown, the seating company, based in Poland, went bust as did the second one in Spain, followed by another 12 in Europe and a couple in the UK. Now they are using a company in Southend, Essex.

In the meantime in July the Regal launched Regal on the Road, using the John Peel Centre with a reduced seating capacity and screening up to 14 films a week.

One unknown will be the availability of new films once the cinema is ready to open. Especially after the release of the new Bond Movie, No Time to Die, has been postponed twice. All being well, the new, refurbished Regal will re-open in February/March 2021.

For the time being, meetings will be on the usual dates but via Zoom.  You will receive emails in advance to book and give you the log-in details and passwords. For both the breakfast and the coffee sessions, pre-booking is essential.

Chairman Allan is always happy to receive any suggestions for what members want to see the Chamber doing in the future. Please send your ideas (and your wish lists) to allan@millhousemedia.co.uk

Dates for your diary:

Anyone who has a story to publicise should contact marketing officer Alison Withers: alison@multimediareputations.com

This site uses Akismet to reduce spam. Learn how your comment data is processed.

Under the current government guidelines for Covid19, we have decided to postpone all face-to-face networking for the time being. We will advise when these are reinstated.

Sign up for our Newsletters now to be kept informed!

The subscription form is at the foot of this page.

Taking a break till the New Year!

For information on other events in Suffolk

Businesses and coronavirus – guidance from the government

Get social with us

Share This
We use cookies to ensure that we give you the best experience on our website. If you continue to use this site we will assume that you are happy with it.OK